I've always been a function over form kind of guy. I want something that works well and lasts long. Looks are secondary to durability to me, which is why I own a Thinkpad. I need something that isn't going to die from overheating or from an accidental spill or drop. It has to keep going - so I can keep going.

Lenovo laptops are quite durable, and fit my function over form preferences.

Below you'll find my personal Thinkpad T520 that has been dropped off a ladder, not once, but twice. Like bulletproof glass, its plastic has sustained minor cosmetic flaws that haven't affected the structural integrity of the laptop. 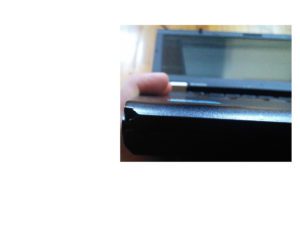 This thinkpad was dropped from a ladder twice. Here is the result of the first drop.

This is from the second drop this Thinkpad T520 took off of a ladder.

Lenovo laptops aren't the sexiest, and they aren't the cheapest, but they're made to last. People always ask me what they should get so they don't wind up back here, and then they ask if I sell them. It seems silly to consistently recommend people purchase something that we don't sell, so we decided to start selling Lenovos.

So, before you go to Best Buy to purchase a disposable piece of crap because it has a gig more RAM or a flashier case, ask yourself what you value more. 200 extra MHz on the processor, or a trip to us when the machine dies?

We sell machines from $475 to $900, so there is a decent range from mid to high end, ultraportable to standard sized. Come in to learn more!

Made in America
No outsourcing
24/7 support